Aphids are one of the most common and recognised plant pests. They can occur on almost all plant species both outdoors and indoors. Aphids are small, mostly drop-shaped insects that are 1-4 mm in size. We have hundreds of different species of aphids here. They appear in different colours such as green, yellow, grey or black. Normally, aphids are wingless insects but winged forms are produced at certain times of a year in many species. Some species damage only certain plants; they don’t colonise other plants. However, other species can occur on many different plants.

On outdoor plants, the first indication of aphids is often the curling of leaves; it is here that aphids hide. This is particularly seen in cherries. Curled leaves are a sign of infestation with aphids.

Depending on the weather, the first aphids appear as early as April. In indoor plants, they can occur all year round. Tub plants are at risk in winter habitats as well. Surprisingly, the infestation can happen even in the middle of winter when there is snow outside. Even we at Neudorff don’t know where they come from!

Aphids are usually found on the undersides of leaves and on shoot tips. They multiply until autumn. After that the adult insects die, only eggs hibernate – even at -20 °C in cold winters. That aphids and other insects freeze to death in cold winters is a myth. Insects are perfectly adapted to our climate.

In spring, the first aphids hatch from the overwintering eggs. They start multiplying immediately. A special phenomenon here is that until autumn, there are only female aphids who give birth to live young ones. This means there are no males, and hence no fertilization and oviposition either. So there are only females that produce new females that are an exact copy of their mother. These newly born aphids can start reproducing within 10 to 14 days of their birth. One aphid can give birth to up to 100 young ones in three weeks. This is rather quick, which is why very large aphid colonies can develop within a short time.

If all aphids remain on the same plant, the plant quickly dies. Then aphids no longer have a source of food. That’s when a fascinating development takes place: if there are too many aphids on the same plant, winged aphids are suddenly born –  to the same aphids that previously gave birth to aphids without wings. Winged aphids fly, or are carried by the wind, to new plants, where the next wingless generation is born.

In the course of their development, aphids, like all other insects, shed their skin several times. This is because insects don’t have an "internal skeleton" with bones like us humans. They have an "outer skeleton", a solid shell that does not allow growth. Therefore insects break the old shell when they grow. These shells are found on the upper surfaces of leaves below. If you find them, you can be sure that there are aphids on the plant. Many plant lovers confuse them with white flies.

In autumn when the temperatures are lower, the females give birth to male offspring for the first time. These males fertilise the females, which then produce eggs and lay them on the so-called "winter host". This winter host is a woody plant, i.e., a bush or tree, often a rose plant. Here, eggs can tolerate temperatures of -20 °C without any problem. Adults die and only the eggs survive. The following spring, young aphids hatch out of these eggs and fly to the so-called summer host – a perennial herb or annual plant – and the cycle starts all over again.

Aphids are usually found in colonies on shoot tips and on the undersides of the youngest leaves since the plant sap is most nutritious in these parts. To absorb the sap, aphids pierce the plants several times with their proboscis until they hit a vascular bundle (i.e. a plant vein with the sugar-containing plant sap). Due to the negative pressure in the plant, the plant sap flows into the aphid without it having to suck it actively. It mainly utilises the valuable proteins contained in the sap.

Most of the excess sugar solution is excreted undigested. As aphids are located on the undersides of leaves, this sticky honeydew falls directly onto the leaves below. Or even on the windowsill! Black fungus often settles on this layer. Although this so-called "sooty mould" does not directly damage the plant, it does hamper its appearance and photosynthesis, thus weakening the plant.

The sucking activity of aphids leads to crippling of shoot tips and leaves, and also causes buds to fall off. In addition, many aphids transmit dangerous virus diseases that cannot be combated. Some plants tolerate a certain amount of aphid infestation. Others, such as lupins, can die due to aphids.

Aphids are found in every garden and also commonly on balcony plants. You cannot prevent their occurrence. However, you can make it particularly difficult for them by taking good care of your plants. This primarily involves choosing the right spot for your plant. A rose plant, for example, needs sunlight. It will grow rather poorly in shade and fall ill more quickly. The right soil also contributes to plant health. For example, most rhododendrons grow in a rather acidic, humus-rich soil and cannot thrive in heavy loamy soil.

Proper nutrition has a great impact on plant health – just like in humans! If plants receive too little fertilizer, their tissue tends to grow weak and soft. Similarly, inferior-quality mineral fertilizers, which usually have high nitrogen content, also make the plant tissue soft and unstable. Aphids can easily pierce such tissues and suck the plant sap with their proboscis from here. With our Organic Multipurpose Plant Food and our Organic Liquid Fertilisers, you can be sure that you provide optimum nutrition to your plants.

In forests, red wood ants are very useful for protecting plants. Unfortunately, the ant species found in our gardens don’t protect our plants. They protect aphids from adversaries such as ladybirds and other beneficial organisms. In fact, they can also kill beneficial organisms. With a greaseband, which you place around the trunk of shrubs, you can prevent ants from climbing up and protecting the aphids.

In nature, there is always a balance between harmful and beneficial organisms: eat and be eaten is the motto. You can do many things to make useful insects feel at home in your garden, or even in your balcony. Often, insect larvae eat different food from the adults. This is the case with hoverflies or lacewings, for example. Adult insects are flower visitors and feed on pollen and nectar. Their larvae however are voracious aphid predators. So it is a good idea to plant nectar and pollen-giving flowers. A small flower meadow in the garden goes a long way. You can read more about this in our article "Wild bees & other beneficials".

If the infestation becomes too severe, agents with active ingredients similar to those found in nature can be of help. We have a selection of products for you, depending on where you want to use the agent.

Aphids on indoor ornamentals and greenhouse

Aphids on ornamentals, pome fruit and kohlrabi in home gardens and on allotments

How to use these agents correctly 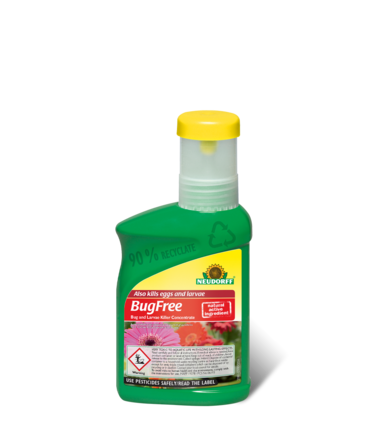 BugFree Bug and Larvae Killer Concentrate+
+) Use plant protection products safely. Always read the label and product information before use.

Plant pests and diseases, if they occur, can be detected with the help of our plant doctor www.neudorff.co.uk/natural-garden-advice/plant-doctor.html. Here you will also find tips for prevention and control.

There are over 40 different ladybird species in Britain alone. Most common is the red seven-spot ladybird, which can also appear in other colour variations. One ladybird can kill about 50 aphids per day and is therefore very welcome. A ladybird can live up to two years. Even the ladybird larvae, which look completely different, eat many aphids. Ladybirds survive winters as adult insects, often in a layer of leaves under bushes or between perennial herbs.

Those who open their doors in summers are often visited by flying insects that are about 1 cm in size and have large, pale green wings. These lacewings are mostly flower visitors. However their larvae are not known as "aphid lions" for nothing. They exterminate aphids in large numbers. Females lay eggs on stems in early summer and again during summer, directly in aphid colonies. Newly hatched lacewing larvae immediately prey on aphids.

They are often confused with wasps, but their flying skills are quite distinctive: a hoverfly can virtually stand still in the air and can also fly in a zigzag pattern – both abilities that wasps don’t possess. We have many different species of hoverflies, which differ in their way of life. While adult marmalade hoverflies feed on pollen and nectar, their larvae prefer to eat aphids. Thus they can eat up to several hundred aphids by the time they pupate.

Many useful insects are flower visitors as adults. Do them a favour and predominantly grow plants that provide pollen and nectar. Preferably avoid densely packed, highly cultivated roses or dahlias. This is because the pollen and nectar producing parts of the flowers are transformed into petals. Hence, these packed varieties are of no use to insects.

It helps to convert a part of your lawn into a flower meadow. Some seed blends are precisely tailored to the needs of different beneficial organisms. Many of them bloom from spring to autumn and for years. They tolerate dryness very well and are much easier to maintain than a lawn because you only need to reap them twice a year. That’s how easy it is to lure useful helpers into the garden.

A list of suitable forage plants for wild bees can be found here.